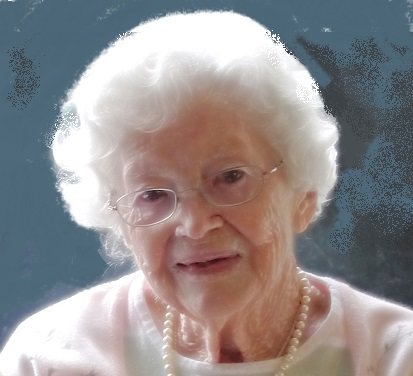 (nee Mulholland), aged 106, passed away at Forest Ridge Senior Living Community November 9, 2020 in the company of kind and loving caretakers and staff.
Kathryn was born to George and Katie (Kelly) Mulholland in Philadelphia, Pa in 1914.  “Carefree Kathryn” – as her mother often referred to her – roller-skated the sidewalks of south Philly as a little girl and once caught a ride behind a delivery truck, which nearly ended in disaster and was never repeated.  She was the 6th of 7 children – 3 brothers and 3 sisters – and the smallest of the group.  Her father, a strapping sergeant on the Philadelphia police force, often brought home tonics and vitamins to bolster her, but she remained slight well into adulthood.  She was quarantined at home for two weeks in 1918 with the flu, ironically, but survived and thrived.
The family moved to Drexel Hill, Pa sometime in the 1920’s and Kathryn attended high school at Upper Darby high where she acquired the nickname Kitty, which stuck for about 80 years until she announced about five years ago that she preferred Kathryn!  She married her high school sweetheart – Howard Wesley Lorraine, in 1936, but he tragically passed away in 1942 only 14 months after the birth of young Howard.  Widowed Kathryn went to work as a slow typist but quick and accurate stenographer for the Immigration Service.  In 1944 through a mutual friend, she met Oscar L. Klasen, a Marine from Oshkosh, WI, about to ship out to the South Seas.  They dated briefly, communicated lovingly, and as the war came to an end, reunited and were married in 1946.
They and little Howard moved to Milwaukee soon after and a year later they brought Ronald home from St. Mary’s Hospital after the Big Snow Storm of January 1947.
Oz worked at Allen-Bradley for 30 years, Kathryn was a Christian Mother at St. Lawrence Parish on Milwaukee’s south side, raising two boys and moving into their own home in 1958 for 41 years.
This couple danced together at the Cudworth Post, swam together at the old Eagle’s Club and golfed all around Milwaukee and Wisconsin with Oscar’s brothers and sister-in-laws.
In 1999 Oz’s failing health gave Kathryn cause to move them to Forest Ridge.  Oz soon needed more care and went to Clement Manor where Kitty visited him almost daily for 6 months before his passing in the Fall of 2000.  Kathryn, who enjoyed people and activity greatly, became active at Forest Ridge as a greeter and worker in the in-house store.  She spent 21 years as a resident of Forest Ridge making new friends continuously and flourished with the amazing love and care she received from a remarkable staff, particularly as her needs grew.  A wonderful group of people surrounded Mom to the end.
She was throughout her life a devout Catholic, devoted especially to the Blessed Mother, and said a million rosaries for peace.  She loved to paint and enjoyed rosemaling, painting commemorative dishes and trays for many relatives.  She relished seafood and riding the waves at the Jersey shore back in the “day” and every summer we could return .   Most of all she simply loved people –  family, neighbors and friends.  She even welcomed the boisterous friends her sons brought home, too often in droves.  Oh yes, and a bit of whiskey – Oz made a great Manhattan!
This fragile child who outlived all her siblings, also nearly died in 1960 from colon cancer.  She lost two husbands, and her beloved son Howard (Skip/Kelly) passed away in 2007 from heart failure.
She is survived by her son Ron (Mardell) who could not be with her at the end due to COVID concerns, but just before her passing they had a brief and animated phone conversation that she seemed to request, so he (I) was able to hear her voice one more time and express our love.
For the past few years she has yearned to be in the arms of the Lord and so she is.  There is sadness in her passing, but greater joy in her spiritual renewal.  I loved my Mom very much and I am happy for her today.

With all the pandemic issues Kathryn will be interred quietly and peacefully without gatherings.  She would want all to stay safe and well, as do I.  Memorials may be indulged at another, safer time.  I ask only for a simple prayer in honor of Kathryn’s good long life.